Judges and the public

In principle, judges are required to keep a distance from the community. For instance, under the fourth principle of the Sharjah Convention, Arab judges are instructed to maintain a balance between their judicial duties and their engagement in society.1 However, in practice judges are not insulated from society: they remain part and parcel of it primarily because of their accessibility: the most visible relationship is through legal disputes.

In 2017, the Hague Institute for Innovation of Law (HiiL) surveyed Lebanese and Jordanian nationals on their confidence in judges and courts in their respective countries. Responses from approximately 6000 participants in each of the two studies in Jordan3 and Lebanon.4

Table 1. Perceptions of courts in Jordan and Lebanon (HiiL) 5

The public perception of courts in Jordan was more positive than in Lebanon, with two-thirds of respondents (67%) agreeing the courts generally treat the people with respect, over half (59%) agreeing courts are fair and impartial and explain their decisions (54%) and just under a majority (48%) agreeing that courts protect the interests of the rich and powerful above those of ordinary people.6 In Lebanon, perceptions of courts were less positive with only a minority saying that courts treat people with respect, make a fair decision and explain decisions.7

The above findings shed important light on the general public and their perceptions surrounding access to courts and judges. The two studies made by HiiL in Jordan and Lebanon show that the public perceptions of courts were divided, and individuals from both countries tend to have different expectations, attitudes, values, and beliefs about the judiciary.8 Although is an important source of evidence-based information, it is one-sided. To paint a complete picture and help towards understanding the dynamics of access to justice the other side must be assessed: the very gate-keepers of justice, judges.

Recently I sought to explore how judges themselves think they are perceived by the public in their respective jurisdictions. Through an anonymous survey, judges were asked to indicate whether they agree or disagree to a set of statements relating to their relationship with the public.9 In total, 55 judges from six different Arab countries participated.10Figure below shows judges’ responses to four specific statements about how the public in their country views the judiciary. 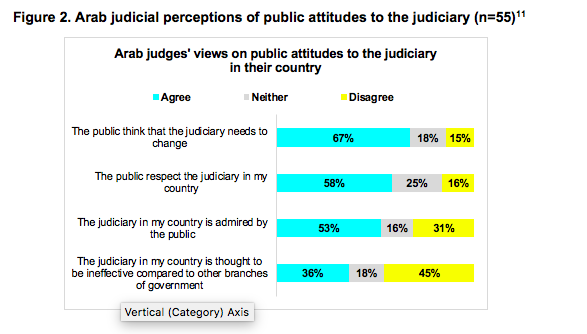 These findings provide for an additional perspective on the relationship between the public and judges in the Arab Middle East. The findings indicate Arab judges tended to feel that the judiciary was respected and admired by the public, but most also thought the public in their countries wanted the judiciary to change and saw the judiciary as ineffective. The findings corroborate the idea that judges are not isolated from or unaware of public perceptions and that they are consciously aware that the public tends to perceive their judicial role differently.

How judges themselves in Arab societies think they are perceived by the public is an important element because it may indicate whether or not there is a conflict of expectations vis-à-vis the two groups. If there is such a one, access to justice may be difficult to achieve. Building on recent empirical studies such as the WJP and HiiL on legal experiences and satisfaction of individuals, future research in relation to access to justice should deepen the inquiry about public perceptions of judges and seek to understand the link between the two groups.

5 Findings from Jordan and Lebanon are illustrated in Table 4 below where answers of “Agree strongly” and “Agree” are combined.

11 S. S, Razai The Role and Significance of Judges in the Arab Middle East: An interdisciplinary and empirical study (PhD, UCL, 2018)

IEDJA is an apolitical organisation and its ethos is to observe, facilitate, and allow for informed discussions of law and justice in the Arab-speaking region.